A beach in Tuscany.

These hot summer days all my time away from Villa Rosalena seems to involve getting in water somehow. Beach, river, pool, lake, anywhere cool! Yesterday was to Marina di Vecchiano. This is the beach we go to most often.  Reason number 1 of course is ease of access from Bagni di Lucca.

But reason number 2 is it’s a very large free beach, as you can tell from the towels on the sand and many colours of umbrella.  Many beaches on the Tuscan coast are paying beaches, you pay to enter a strip of beach owned by a stabilmento and this buys use of sunbeds, umbrellas, shower, bar etc for the day.  Sometimes we want all of this, but most often we want to spend just a few hours a the beach and are happy to take our own stuff.

Reason number 3 is the sand! I’m not a fan of bathing off rocks or pebbles, and Marina di Vecchiano has lots of sand! Though everyone lines their umbrella up along the waters edge!

What Marina di Vecchiano does have in common with every other beach in italy is people selling stuff. It’s quite nice not to have to get up from your towel and go off to buy an ice cream or drink, it comes to you! Often what they’re selling is useful for the beach like sunglasses and hats, but other stuff is not at all useful on a beach like DVDs and handbags, but some people must buy them!They’re not too annoying, always polite and they move on quickly if you don’t show any interest. These two have stopped to chat as they pass each other, one is selling slice of coconut and watermelon, the other sunglasses.

If you don’t head to the main part of the beach you can instead follow a path to the estuary of the River Serchio. It’s a tranquil spot, with fishermen and pleasure boats. 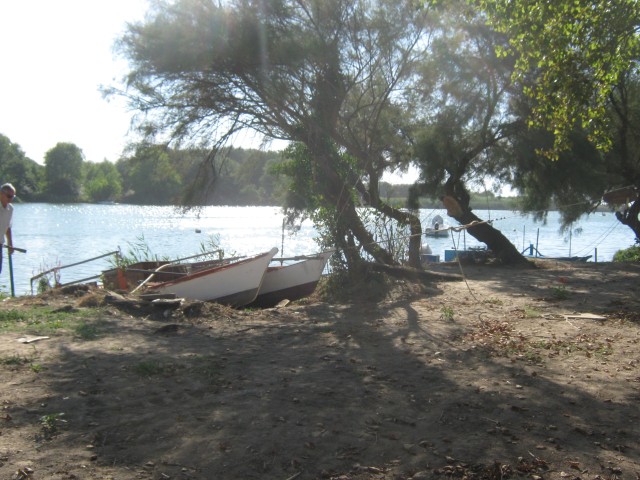 Lots of people were zooming up and down the river on little motor boats,  they were using them to get to this strip of sandy beach at the river mouth.  I’m jealous, this double sided beach, sea on one side, river on the other looks very appealing.

How to get to Marina di Vecchiano

We reach it from the Pisa Nord exit of the A11/A12 autostrada. After the toll booths turn left, then take the first right (brown sign for Marina di Vecchiano) Keep following the well signed small roads past fields and woods.

The first car park is for reaching the river and estuary (summer weekends there is  a shuttle bus to the main beach from  here) For the main beach continue further on to the right a few minutes.

The car park is 6.50e for a half day, 10 e for a full day, but as the beach is kept clean and it’s a lot cheaper than the paying beaches elsewhere it seems fair.

About From a Tuscan Villa

8 Responses to A beach in Tuscany.